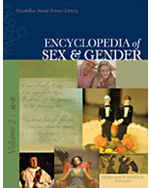 Gender studies have become a major academic field since the 1980s, providing a lens through which to reexamine and reevaluate knowledge in every area of human interaction and activity. The Encyclopedia Of Sex And Gender encompasses the various concepts of sex and gender that have arisen from the critical study of those subjects worldwide, as well as the emerging reimagination of the more traditional humanities and social sciences. Broad theoretical essays address issues of sex and gender at the personal and the social level; others examine issues of identity, status, class, ethnicity, race, and nation; of sexuality and the body; and of social institutions and the structures of representation--all through the lens of gender. With a truly global perspective, topics of individual entries include changing conceptions of "the feminine," the family and masculinity, religion, morality, cultural images, medical practice, public health, economy and society, and many more. In addition, the work discusses the influences of gender studies on various academic disciplines, examining how it has transformed and utilized methods and theories that have evolved.

"Undergraduates in these fields, as well as advanced high-school students and educated general readers, need not look any further than this landmark work to explore, examine, and evaluate the various concepts of sex and gender that impact nearly every area of human interaction and activity. It is recommended without reserve for large public and academic libraries." --Booklist, April 15, 2008

"This is a valuable resource for anyone involved in gender studies, and a useful, matter-of-fact reference for those who are curious about matters related to sex." --School Library Journal, April 2008

"an accessible work addressing the complex topics of sexuality and gender. The broad scope and interdisciplinary approach make it a useful resource for both public and academic libraries." --ARBA, 2008

"The changing view of sex - from something that is procreational to something that impacts all of our lives - combined with an explosive growth in interest in gender studies makes this a landmark reference source in the first decade of the 21st century. In this set, broad theoretical essays examine issues of sex and gender at both the personal and social level." --Library Journal, April 15, 2008

"This groundbreaking encyclopedia explores the social constructs concerning sex and gender in human history. While many of the 730 articles examine the biological aspects [of] the human body, reproduction, the act of sex, and disease, the same essays also present cultural beliefs surrounding sexual practices and body parts. The examination of the cultural constraints concerning sex is not limited to Western civilization but includes most major religions, numerous ancient civilizations, and traditional customs in Africa, India, China, Japan, and the Islamic Middle East. A team of international scholars provides a truly global perspecitve on one of the fundamental issues of identity and society. This scholarly encyclopedia is highly recommended to academic and public libraries." --Lawrence Looks at Books, June 2008

"In this four-volume encyclopedia, chief editor Malti-Douglas (Indiana U.) presents some 730 alphabetical entries, written by an international team of scholarly contributors, that collectively explore a broad array of topics that fall under the purview of investigations of sex and gender across cultures and time in the social sciences. A cumulative index is includded in the final volume." --Art Book News Annual, 2008