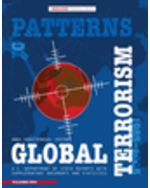 These important documents have a dramatic history themselves. In the aftermath of 9/11 and the U.S. government's efforts to understand and combat terrorism, the annual Patterns of Global Terrorism report became a political football. The statistical data on terrorist incidents around the world were incorrectly reported in the 2003 report, and then corrected: here.

In April 2005, the U.S. Department of State announced that it would no longer publish the reports. A blogger and security specialist, Larry C. Johnson, announced that the government was suppressing the report because it showed clearly that the war on terror wasn't working: significant incidents of terrorism in 2004 were the highest ever recorded, and loss of life in 2004 was the second highest in 35 years (2001 continues to be the highest). Berkshire's Patterns of Global Terrorism 1985-2004: U.S. Department of State Documents and Supplementary Material, With Updated 2004 Reports is arranged in a user-friendly format replete with tables, graphs, and illustrative material -- much of it from the original reports but with additional material developed by Berkshire and its editors (and clearly indicated as additional content). This reference set will be an essential resource for every college, school, and public library. A full, comprehensive index will guide readers, and summary definitions, chronologies, and year-to-year comparisons will provide broad context. Fifteen related government documents are integrated to provide context and to give readers a sense of the debates, past and present, about global terrorism.

Originally published in print format in 2005.