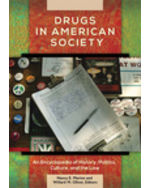 Drugs in American Society: An Encyclopedia of History, Politics, Culture, and the Law, 1st Edition

Despite decades of effort and billions of dollars spent to combat the problem, illicit drug use in the United States is still rampant and shows no sign of abating. Covering illegal drugs ranging from marijuana and LSD to cocaine and crystal meth, this authoritative reference work examines patterns of drug use in American history, as well as drug control and interdiction efforts from the nineteenth century to the present. This encyclopedia provides a multidisciplinary perspective on the various aspects of the American drug problem, including the drugs themselves, the actions taken in attempts to curb or stop the drug trade, the efforts at intervention and treatment of those individuals affected by drug use, and the cultural and economic effects of drug use in the United States. More than 450 entries descriptively analyze and summarize key terms, trends, concepts, and people that are vital to the study of drugs and drug abuse, providing readers of all ages and backgrounds with invaluable information on domestic and international drug trafficking and use. The set provides special coverage of shifting societal and legislative perspectives on marijuana, as evidenced by Colorado and Washington legalizing marijuana with the 2012 elections.