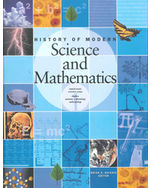 The History of Modern Science and Mathematics is an innovative, multi-volume encyclopedia for students high school level and above. Organized topically around the various disciplines of science and mathematics -- from algebra, anthropology and astronomy to paleontology, physics and trigonometry -- this comprehensive reference takes readers through revolutions scientific and industrial, outward to the far limits of space and inward to the tiniest particles. Sidebar features and explanatory illustrations and historical photographs expand and contextualize the encyclopedia-style entries. Also includes an interdisciplinary timeline, a bibliography and subject index.

"Baigrie has created a very useful reference source. Modern science is defined as post-Copernican, but the thematic coverage of 23 scientific disciplines includes their global historical origins. For example, the history of algebra encompasses Babylonian, Chinese, and Islamic along with the familiar Greek mathematics. Emphasis is on the natural rather than the applied sciences� Histories of the specific disciplines, from algebra to Systematics average about 35 pages in length. Volume 4 concludes with an 'Interdisciplinary Timeline' and a name and subject index. The name and subject indexing is very solid... the coverage in the bibliographies is impressive... The audience for this resource includes advanced high-school students, undergraduates, and general readers... the essays are carefully written to present technical subjects in jargon-free terms. The text is broken up with sidebars, illustrations, graphs, and charts. The use of bold type refers readers to definitions or cross-references in the margins. Sidebars add biographies or information related to scientific instruments, practices, or methods; institutions; connections between science and society; and other topics... The History of Modern Science and Mathematics will find a home in the reference collection on the history of science... Highly recommended for high-school, public, and university libraries." -- Booklist (December 2002)

"Written for high school and undergraduate students, this slim four-volume set attempts to synthesize the history of scientific developments.... The work ranges from the 17th century to the present without trying to include the most recent developments. ... The well-written articles are about 20 to 30 pages in length and are supplemented with defi-nitions in the margin, sidebars providing additional information, and 270 black-and-white illustrations. ... This set provides a nice overview for those with a basic knowl-edge of science...[and] is a useful and interesting resource for high school, public, and college libraries." -- Library Journal (January 2003)

"Because of its topical approach and its broad coverage in both time and place, this set should find a home in most history of science collections. It surveys the historical devel-opment of 23 scientific disciplines, with emphasis on the natural rather than the applied sciences." -- Booklist (January 2003)

"Gr 10 and up&#151Advanced high school students will find 30 substantial overviews that provide either a solid grounding in the history and intellectual development of a field of 'pure' science or a stimulation discussion of such special topics as the nature of mathematical proof or the differences and interrelationships between science and technology...The articles on the chosen disciplines ('Algebra' to 'Systematics'), open with surveys of ancient and medieval milestones, but focus most closely on the last 300 years...This set makes an invaluable alternative to G.N. Cantor and Robert C. Olby's Companion to the History of Modern Science (Routledge, 1996) or general science encyclopedias, and will be a definite asset to any large reference collection." -- School Library Journal (November 2002)

"This book presents the conceptual evolution of scientific disciplines from 1543 (date of Copernicus De revolutionibus) to the twentieth century. There are introductory essays on the relation of science to the history of science and of science to technology, the scientific basis of medicine, and the nature of proof, together with overviews of biology, mathematics, and physics. Essays on the individual disciplines follow in alphabetic order .... The essays are well written and interesting, starting with Medieval and Classical background and then tracing the discipline's evolution from the scientific revolution to the twentieth century. Twentieth-century history is treated briefly as full coverage would have greatly enlarged the book. Coverage generally ends early in the century or is limited to one or two major topics. ...This book can be highly recommended for high school, college, and public libraries. Its combination of depth and accessibility is unique." -- American Reference Books Annual (ARBA) (2003)

"The History of Modern Science and Mathematics is a scholarly collection of essays and writings on a variety of topics. The four volumes are designed to explain to the high school student the relationship between science and mathematics and the way in which history has played a role in advances in these fields. The essays presented reflect not only the views of scientists and academicians in the sciences, but also the perspectives of noted historians who trace the role that cultural development has played in these areas. ...Everything in these volumes is very well documented and referenced. I found the set to be an excellent collection of scholarly explanations and essays." -- Science Books & Films (June 2003)