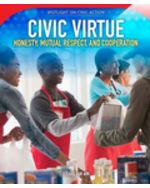 The development of the U.S. Constitution was influenced by tenets of a republican government. Civic virtue, or concern for the common good, guides how U.S. citizens go about living their daily lives. This book defines civic virtue and gives concrete examples of civic virtue in practice. Civic virtue requires citizens to put the common good ahead of their own personal desires to make sure that the republican government operates fairly for all citizens. The Constitution stresses the importance of the government existing for the people and being run by the people, which of course heavily relies upon the peoples' interpretation of Civic virtue.