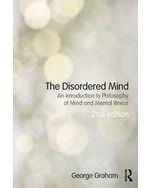 The Disordered Mind: An Introduction to Philosophy of Mind and Mental Illness, second edition examines and explains, from a philosophical standpoint, what mental disorder is: its reality, causes, consequences, and more. It is also an outstanding introduction to philosophy of mind from the perspective of mental disorder. Revised and updated throughout, this second edition includes new discussions of grief and psychopathy, the problems of the psychophysical basis of disorder, the nature of selfhood, and clarification of the relation between rationality and mental disorder. Each topic is clearly explained and placed in a clinical and philosophical context. Mental disorders discussed include clinical depression, dissociative identity disorder, anxiety, religious delusions, and paranoia. Several non-mental neurological disorders that possess psychological symptoms are also examined, including Alzheimer's disease, Down's syndrome, and Tourette's syndrome. Containing chapter summaries and suggestions for further reading at the end of each chapter, The Disordered Mind, second edition is a superb introduction to the philosophy of mental disorder for students of philosophy, psychology, psychiatry, and related mental health professions.