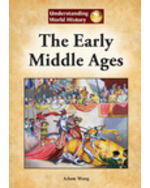 The Early Middle Ages of European history began with the fall of the Roman Empire in 456 AD, which fractured the region into small, decentralized kingdoms. For roughly the next 450 years, these kingdoms were dominated by warfare, plagues and famines, a powerful Church structure, and a strict social and economic system called feudalism. Nonetheless, a more enlightened culture also began to emerge, symbolized by the political, economic, social, and educational reforms of the era's dominant figure: Charlemagne, King of the Franks.