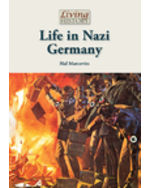 Life in Nazi Germany represented one of the darkest chapters in human history as the regime of Adolf Hitler took dictatorial control while leading the country into war. Among the topics discussed in this social history are the powers of the Gestapo, which arrested and tortured ordinary citizens, domination of the news media by Hitler's propaganda machine, the schooling of young people in Nazi ideology, and the persecution of the Jews who were stripped of their citizenship and property and eventually shipped off to Hitler's notorious death camps.

Front Cover.
Copyright Page.
Contents.
Foreword.
Important Events in Nazi Germany.
Introduction: The Night the Nazis Burned the Books.
1: The Power of Propaganda.
2: The Police State.
3: Jewish Life in German Cities.
4: To Be Young in Nazi Germany.
5: Life on the Home Front.
Source Notes.
For Further Research.
Index.
Picture Credits.
About the Author.