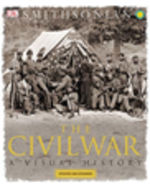 Produced with the Smithsonian Institution and released in conjunction with the 150th anniversary of the start of the war, this title is the definitive visual history to one of the most defining moments in our country's history. Detailed timelines, revealing first-person accounts by soldiers and civilians, key political and military leaders, as well as examinations of broader topics, such as transportation, the economy, and the treatment of wounded soldiers.