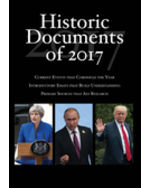 This series is renowned for the well-written and informative background, history, and context it provides for each document. Each volume begins with an insightful essay that sets the year’s events in context, and each document or group of documents is preceded by a comprehensive introduction that provides background information on the event. Events covered in the 2017 Edition include: the intricacies of the new presidential administration of Donald Trump, Russian involvement in the U.S. presidential election, U.S. and global policies on immigration and refugees, landmark Supreme Court rulings on gerrymandering and state grant money for parochial schools, and the appointment of Neil Gorsuch, global warming and climate change agreements and policies, European elections, including those in the UK, France, and Germany, outcomes of the G-20 Summit, and North Korea and international calls to action.