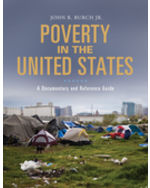 Poverty in the United States: A Documentary and Reference Guide, 1st Edition

Poverty has always been a part of the fabric of American life, and this installment in the Documentary and Reference Guides series fills the gaps left by most educational treatments of the subject, beginning with an examination of poverty at the state and local levels as it was during the early 19th century. A federal plan for addressing poverty was not devised until Franklin Delano Roosevelt launched the New Deal in the 1930s. As these 70 chronologically arranged documents illustrate, the unfinished business of the New Deal, interrupted by World War II, culminated in new legislation during John F. Kennedy's New Frontier and Lyndon B. Johnson's War on Poverty; progress, however, fell victim to the Vietnam War, ushering in decades of rollbacks under presidents of both parties. Noted scholar and librarian John R. Burch Jr. provides thorough coverage of these and contemporary events throughout which poverty has endured, including the Great Recession of 2008-2009, the minimum wage debate, and the Affordable Care Act and attempts to repeal it.