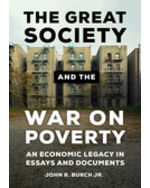 The Great Society and the War on Poverty: An Economic Legacy in Essays and Documents, 1st Edition

An ideal resource for students as well as general readers, this book comprehensively examines the Great Society era and identifies the effects of its legacy to the present day.