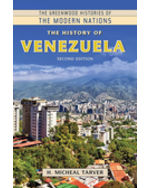 The History of Venezuela, 2nd Edition

For decades, the economy of Venezuela has depended on petroleum. As a consequence of a reduction in the price of oil, Venezuela recently experienced an economic downturn resulting in rampant social spending, administrative corruption, and external economic forces that collectively led credit-rating agencies to declare in November 2017 that Venezuela was in default on its debt payments. How did this Latin American nation come to this point? The History of Venezuela explores Venezuela's history from its earliest times to the present day, demonstrating both the richness of Venezuela and its people and the complexity of its political, social, and economic problems. As with all titles in The Greenwood Histories of the Modern Nations series, this chronological narrative examines political, economic, cultural, philosophical, and religious continuities in Venezuela's long and rich history, providing readers with a concise yet up-to-date study of the nation. The volume highlights the country's wide variety of cultures, languages, political ideologies, and historical figures and landmarks through maps, photographs, biographies, a timeline, and a bibliographical essay with suggestions for further reading.