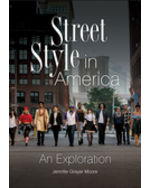 A comprehensive resource that will prove invaluable to fashion historians, this book presents a detailed exploration of the breadth of visually arresting, consumer-driven styles that have emerged in America since the 20th century.