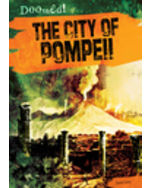 In AD 79, the residents of the Roman city of Pompeii were shocked when a nearby mountain exploded, releasing superhot ash, rock, and gas on the surrounding areas. Though the people who didn't flee Pompeii were doomed, the volcano preserved their remains, allowing us to better understand a fascinating time in the Roman Empire. In this book, astonishing photographs of Pompeii, primary source records of the occurrence, and riveting text are key features of this high-interest volume.