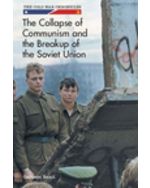 The Cold War Chronicles: The Collapse of Communism and the Breakup of the Soviet Union, 1st Edition

When the Soviet Union disintegrated into independent countries, the West hailed the collapse as a victory for democracy. The dismantling of the Soviet Union as the centralized economic system required the separate countries to establish their own economies, assemble political structures, and reconcile territorial issues. As a result of the disintegration, many peripheral wars have ensued. This book looks at the transformation of politics throughout the world as new military and economic alliances were established after the Soviet Union’s breakup.