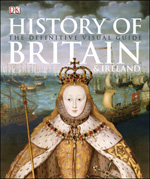 From the Roman conquest of 43 CE to the Norman conquest of 1066 and from the Elizabethan age of Shakespeare to the Iraq and Afghan wars of the 21st century, DK's History of Britain and Ireland traces the key events that shaped the societies living in the British Isles from the earliest times to the present day. HISTORY OF BRITAIN AND IRELAND is the definitive visual guide to 5,000 years of British history. It includes a comprehensive timeline chronicling key events in the history of Britain and Ireland, in addition to "decisive moment" spreads that vividly describe turning points in British history. It also profiles the people who have had a significant impact on British culture and society through their inventions, discoveries, and ideas.