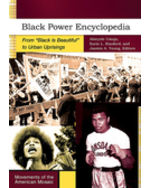 Unlike the Civil Rights Movement's emphasis on the rhetoric and practice of nonviolence and social and political goal of integration, Black Power was defined by the promotion of Black self-determination, Black consciousness, independent Black politics, and the practice of armed self-defense. Black Power changed communities, curriculums, and culture in the United States and served as an inspiration for social justice internationally. This unique two-volume set provides readers with an understanding of Black Power's important role in the turbulence, social change, and politics of the 1960s and 1970s in America and how the concepts of the movement continue to influence contemporary Black politics, culture, and identity. Cross-disciplinary and broad in its approach, this title explores the emergence and evolution of the Black Power Movement in the United States some 50 years ago. The entries examine the key players, organizations and institutions, trends, and events of the period, enabling readers to better understand the ways in which African Americans broke through racial barriers, developed a positive identity, and began to feel united through racial pride and the formation of important social change organizations. The encyclopedia also covers the important impact of the more militant segments of the movement, such as Malcolm X and the Nation of Islam and the Black Panthers.