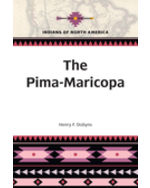 The Pima-Maricopa, part of the Indians of North America series, presents a fascinating portrayal of the history and culture of these native people. The Pima and Maricopa Indians lived for thousands of years in present-day southern Arizona. Though Spanish missionaries entered their territory in the 16th century, their way of life was not disrupted until the California gold rush of the 1840s. Today, these Indians continue to fight for their ancient rights to river water as they try to hold on to their land.