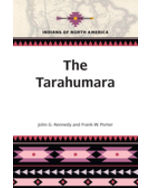 The Tarahumara, part of the Indians of North America series, presents a fascinating portrayal of the history and culture of these native people. The Tarahumara of Mexico is the largest tribe of North American Indians who still maintain a traditional way of life. Their homeland, the rugged country of the Western Sierra Madre, is a bleak region that has historically attracted few non-Indian farmers or settlers. Despite early contact with Spanish missionaries in the mid-16th century and increasing exposure to Mexican society, the tribe has been able to preserve most elements of its unique way of life; to this day the Tarahumara speak their own language, eat their traditional foods, and make many of their tools and much of their clothing.