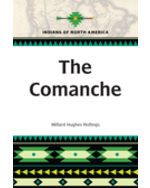 The Comanche, part of the Indians of North America series, presents a fascinating portrayal of the history and culture of these native people. The Comanche Indians were one of the fiercest tribes in North America. They made their home in present day Wyoming and Montana, until they drove the Apache off the southern Plains. Fending off the U.S. government until the late 19th century, they currently work to preserve their distinctive culture.