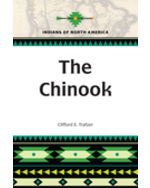 The Chinook, part of the Indians of North America series, presents a fascinating portrayal of the history and culture of these native people. The Chinook lived for hundreds of years in the Pacific Northwest, a region so bountiful that the tribe built up surpluses of food and goods to trade with neighboring tribes. By the mid-1700s, the Chinook controlled all trade in the region, but their power was steadily eroded as increasing numbers of non-Indian settlers arrived in their homeland, bringing deadly diseases with them. Eventually, in the 1850s, government officials compelled the diminished Chinook population to cede over 3 million acres of land. Some Chinook moved to two nearby reservations, but many refused to move and were never given legal title to their ancestral home.

Front Cover.
Copyright Page.
Chapters.
1: Traders of the Columbia.
2: The Arrival of the Suyapee.
3: Meeting Lewis and Clark.
4: Chief Comcomly and the Astorians.
5: The Era of the King George Men.
6: Coping with Intruders.
7: Decline and Rebirth.
Support Materials.
Bibliography.