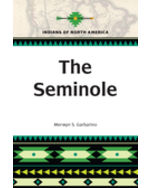 The Seminole, part of the Indians of North America series, presents a fascinating portrayal of the history and culture of these native people. The Florida Seminole are widely known as the only unconquered tribe in the United States. They began as an offshoot of Creek and other Indians who survived the diseases and warfare that took so many lives in the 16th century. In later years, they fought three wars with the United States and then faced a series of other crises. They saw their homelands taken from them and were forced to migrate hundreds of miles south to the Everglades. After decades of struggling to survive, the Seminole have recently undergone a dramatic transformation. The tribe now runs a billion dollar business and leads the national fight for tribal sovereignty and gaming rights.

Front Cover.
Copyright Page.
Chapters.
1: The Way They Were.
2: A Tribe of Runaways.
3: War and Retreat.
4: Making a New Life.
5: The Formation of the Tribe.
6: The Seminole Today.
Support Materials.
Bibliography.