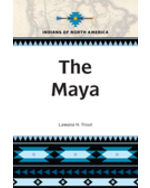 The Maya, part of the Indians of North America series, presents a fascinating portrayal of the history and culture of these native people. In 1839, American explorer and diplomat John Lloyd Stephens entered the jungles of southern Mexico, where he saw the great ruins of abandoned cities filled with pyramids, palaces, and carved stones. Stephens had rediscovered the world of the ancient Maya, a civilization that had flourished within the foreboding jungles of Mesoamerica. This civilization built towering buildings, domesticated maize, studied the heavens to understand the regular movements of celestial bodies, and developed their own system of mathematics, but this advanced society mysteriously declined nearly a thousand years before Stephens arrived.

Front Cover.
Copyright Page.
Chapters.
1: Origins and Survival.
2: The Rise of the Classic Maya.
3: A Time of Splendor.
4: The Count of Katuns.
5: Conquest and Continuity.
6: Modern Maya.
Support Materials.
Bibliography.