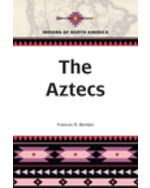 The Aztecs, part of the Indians of North America series, presents a fascinating portrayal of the history and culture of these native people. The Aztecs' civilization dates from 1325, when Tenochtitlan was founded on an island in Lake Texcoco in the Valley of Mexico. The Aztecs built splendid temples and palaces, studied astrology, produced superb crafts, and recorded their poetry and history in picture writing. They also practiced warfare and human sacrifice on a vast scale. When the Spaniards arrived in 1519, Tenochtitlan was one of the world's largest cities. Two years later the Aztecs were conquered. Spain ruled the Mexican subcontinent for three centuries, its religion, language, and technology blending into the Aztec heritage. But the influence of the Aztecs continues today, in the crafts, vocabulary, foods, and beliefs of their modern Mexican descendants.