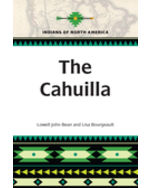 The Cahuilla, part of the Indians of North America series, presents a fascinating portrayal of the history and culture of these native people. In the early 19th century, Spanish missions introduced Catholicism to the Cahuilla and taught them ranching and other skills. As they lost choice land to newcomers, the Cahuilla learned Spanish and, later, English, and found employment on settlers' farms and ranches. Today, many Cahuilla live on reservations. They have recorded their traditional stories and songs and continue to practice important ceremonies and customs even as they have adjusted to a new way of life.

Front Cover.
Copyright Page.
Chapters.
1: The Cahuilla and Their Environment.
2: Working and Living with Others.
3: Managing the Social and Physical Worlds.
4: Rituals of Life.
5: The Arrival of Europeans.
6: The Cahuilla Today.
Support Materials.
Bibliography.