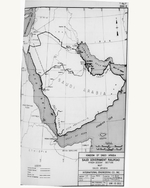 U.S. Operations Mission to Saudi Arabia, 1950–1955: Records of the Office of the Director

This collection is a record of the U.S. Operations Mission's experiences in Saudi Arabia. In it are outlined the programs that were initiated, the problems encountered, and the results of the five year effort in the Point Four program. In Saudi Arabia, there were two chief aims that guided the International Cooperation Administration (ICA) effort and the Point Four Program. The first was to promote the acceptance and support of ICA by cooperating and integrating the efforts of local and regional governments and bureaucrats. The second was to initiate projects that would reach as many people as possible, especially the common people who desperately needed opportunities and help. Three kinds of aid were provided: United States technicians advised or worked with the Saudi Government; supplies and equipment were provided for demonstration purposes; and Saudi personnel were sent to the U.S. or third countries for observation or training programs. Much was achieved in public health, education, public administration, community development, and transportation. The aim of the Point Four program was to promote the combined growth of economic and social improvement and political freedom.