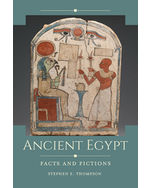 With its pyramids, mummies, and sphinxes, ancient Egypt has fascinated us for centuries. It has been the setting of many films and novels, figuring prominently in popular culture. Much of what the average reader believes about this civilization, however, is mistaken. Through a unique collection of primary source documents, this book critically examines several topics related to ancient Egypt about which misconceptions abound. Primary sources, many in new translations by the author, are drawn from ancient Egyptian, classical Greek and Roman, Muslim, early Christian, and modern European documents. They shed light on popular misconceptions about the divinity of the pharaoh, the role of animals in ancient Egyptian religion, the purpose of the pyramids, the use of slave labor, the Egyptian hieroglyphic writing system, the role of Cleopatra in the defeat of Marc Antony and the fall of the Roman Republic, and the influence of Egyptian religion on the development of early Christianity.

Front Cover.
Half Title Page.
Other Frontmatter.
Title Page.
Copyright Page.
Dedication.
Contents.
Preface.
Acknowledgments.
Introduction.
1: Hieroglyphs Were a Secret Code Created to Conceal the Wisdom of Ancient Egypt.
2: The Egyptians Worshipped Animals and Gods with Animal Heads.
3: Ancient Egyptians Considered the Pharaoh to Be a God.
4: The Pyramids Were Built as Storehouses, Work Projects for the Egyptian People, or Repositories of Knowledge.
5: Ancient Egyptian Society Was Heavily Dependent on Slave Labor.
6: Curses or Booby Traps Protected Egyptian Tombs.
7: Cleopatra Was Responsible for Mark Antony's Defeat by Octavian (Augustus Caesar).
8: The Myths of Osiris, Isis, and Horus Were the Basis for the Accounts of Jesus Found in the Christian New Testament.
Bibliography.
Index.
About the Author.