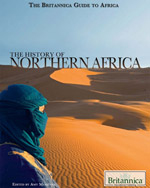 The Britannica Guide To Africa: The History of Northern Africa, 1st Edition

Alternately identified with either the countries of the Mediterranean, those of the Middle East, or other African territories, the nations of northern Africa occupy a unique physical and historical place. After centuries of fielding various foreign invaders, northern Africans have absorbed and co-opted Greek, Roman, and Arab peoples and traditions, among others. Under the pervasive turmoil that has ensued after colonial rule and internecine warfare, readers will encounter a region of various traditions that stands at a unique crossroads between several very different worlds.