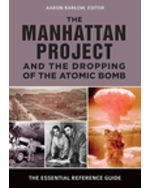 
The Manhattan Project and the Dropping of the Atomic Bomb: The Essential Reference Guide, 1st Edition

This book provides everything readers need to know about the Manhattan Project, the U.S. program that led to development of the atomic bomb during World War II. It begins with a detailed introductory essay on the project and a comprehensive chronology that reveals all the key moments related to the creation of the world's first nuclear weapon. These are followed by an alphabetical collection of relevant entries on such topics as Enola Gay, the first aircraft to drop an atomic bomb; Enrico Fermi, creator of the first nuclear reactor; Hiroshima, the target of the first atomic bomb; and Robert Oppenheimer, director of the Manhattan Project. Dozens of primary sources include eyewitness accounts, government memos, letters, press releases, and other important documents relevant to the establishment and success of the Manhattan Project. Four essays written by prominent scholars address whether the US was justified in dropping the atomic bomb on Japan. Includes an extensive bibliography.