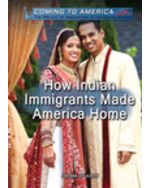 Coming to America: The History of Immigration to the United States: How Indian Immigrants Made America Home, 1st Edition

From agrarian economies to the booming technology industry, Indian immigrants have been a fueling force to the development of today's world. Throughout the intense years of the early 1900s to present day America, they bore the duty of hard labor, political activism against colonizers who have held power in their original home country for 200 years, and the role of pioneers in unfamiliar lands. Readers will discover the journey of the toiling Indian immigrant, the intense political twists, the dark days, and the eventual rise of America's most financially successful and well-educated ethnic group, as told by an Indian immigrant.