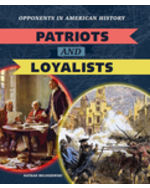 The American Revolutionary War pitted the colonial Patriots, who wanted independence from Great Britain and King George III, against the British Loyalists in North America. Some of the most well-known Patriots included future presidents of the United States, such as George Washington, Thomas Jefferson, and John Adams. It featured prominent Founding Fathers such as Benjamin Franklin, Samuel Adams, John Hancock, and others. This book explores why family, friends, and neighbors in the colonies became divided during the birth of a new a nation. Primary sources from the era and helpful images help readers make meaningful connections with the text.

Front Cover.
Title Page.
Copyright Page.
Contents.
1: Revolutionary Split.
2: Neglect and The Seeds of Independence.
3: Who Were the Patriots?.
4: Who Were the Loyalists?.
5: Fence Sitters.
6: Public Humiliation.
7: Founding Father vs. son.
8: The Boston Massacre.
9: The Boston Tea Party.
10: Common Sense Rejects the Crown.
11: The American Revolution.
12: Competing for Allies.
13: After the War.
14: Peace between Nations but not People.
Glossary.
Index.
Websites.