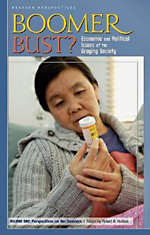 Seventy-six million Baby Boomers are careening toward retirement in the United States. Demographic shifts toward aging populations are taking place around the Western world, as a variety of factors - biological, technological, medical, and sociocultural - are extending life spans. Meanwhile, birth rates are declining. The scaremongers argue that this generational shift is going to be disastrous: It will result in skyrocketing tax rates, lower retirement and health benefits, higher inflation, increased unemployment and poverty, political instability, and a host of other societal ills. But will it? In Boomer Bust?, Robert Hudson assembles leading authors from fields such as economics, political science and finance to separate fact from fiction, highlight the terms of debate, and showcase innovative policies that will prevent disaster from occurring.

From topics like Social Security to older people rejoining the workforce to the elderly as a political lobby, this two-volume set covers the gamut of economic, political, financial, and business issues related to aging. The Boomer generation will leave one of the largest footprints the world has yet seen. In retirement, as in all else, this generation is blazing a path that is affecting succeeding generations profoundly. Boomer Bust? charts a path through the thicket of personal and public policy choices facing not just Baby Boomers but all of society.