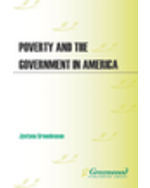 Poverty and the Government in America: A Historical Encyclopedia, 1st Edition

Poverty and the Government in America: A Historical Encyclopedia looks at one of the most important and controversial issues in U.S. history. Debated vigorously every election year, poverty is a topic that no politician at any level of government can escape. Ranging from colonial times to the New Deal, from Lyndon Johnson’s War on Poverty to welfare reform and beyond, it is the only encyclopedia focused exclusively on policy initiatives aimed at underprivileged citizens and the impact of those initiatives on the nation.

Poverty and the Government in America offers over 170 entries on policies implemented to alleviate poverty -- their historic contexts, rationales and legacies. The encyclopedia also features separate essays on how poverty has been addressed at federal, state, local, and Native American tribal levels throughout U.S. history. Complimented by a richly detailed chronology and a wealth of primary documents, these features help readers grasp both the broad contours of government efforts to fight poverty and the details and results of specific policies.