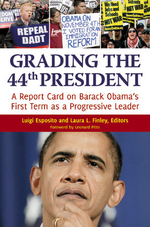 Grading the 44th President: A Report Card on Barack Obama's First Term as a Progressive Leader is written in clear language that is free of jargon and from a leftist perspective, offering a comprehensive analysis and critique of Obama's performance as a progressive president during his first term. The authors provide in-depth analyses with respect to Obama's handling of specific issues, including the economy, education, healthcare, criminal justice policy, the environment, immigration, Iraq and Afghanistan, race relations, gender issues, and gay/lesbian issues, covering topics in detail that general biographies of Obama and examinations of his political career miss. This book presents clear, accessible information for general readers, and contains in-depth discussion of topics useful to high school, college, and university students of sociology, government, political science, philosophy, and history.

Front Cover.
Half Title Page.
Title Page.
Copyright Page.
Dedication.
Contents.
Foreword.
Acknowledgments.
Introduction: Obama and the Promise of Change.
1: Progressivism and Economics: The Case of President Obama.
2: Educating the “Education President”.
3: Negotiating Health: the Challenges of Progressive Healthcare Reform in the United States.
4: Obama, Progressivism, Harm Reduction, and Drug Policy: from War to Health and Rights.
5: “In the Land of the Blind”: Evaluating Obama's Environmental Record.
6: Rating the 44th President on Immigration.
7: Obama at War.
8: Race and the Obama Presidency.
9: The First Female President? Assessing Obama's First-Term Work on Women's Issues.
10: Waiting for Change: Obama and the LGBT Community.
11: Being Progressive on National Security: The Rolling Back of Bush Administration Policies and Keeping America Safe.
Conclusion: Obama and the Future of Progressivism in the United States.
About the Editors and Contributors.
Index.