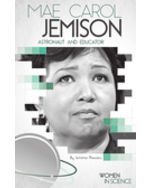 Women scientists have made key contributions to the pursuit of science and some of the most important discoveries of all time. In this book, learn how the American astronaut and doctor chose to pursue a career in science and became the first African-American woman in space, followed by work advocating for space exploration and women and minorities in the sciences. Features include a timeline, a glossary, essential facts, references, websites, source notes, and an index. Aligned to Common Core Standards and correlated to state standards.