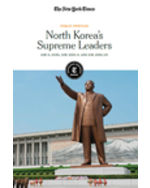 The 2018 summit meeting between Donald Trump and Kim Jong-un brought renewed international attention to North Korea and its leading dynasty. Ruled by three successive generations of the Kim family, North Korea is one of the most authoritarian states in the world. This collection of articles covers the history of their dynasty, including Kim Il-sung's assumption of power in the wake of World War II, the intense cult of personality surrounding him that followed, and the twice-over handoff of power from father to son, first to Kim Jong-il and later to Kim Jong-un. This in-depth coverage presents a tale of human rights abuses, famine, and nuclearization at the hands of three eccentric, unpredictable, and fiercely nationalistic dictators.