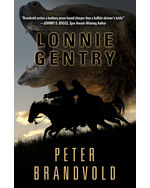 Life has not been easy for young cowboy Lonnie Gentry. Lonnie and his mother live alone‚ working hard‚ raising cattle and horses on their remote Colorado mountain ranch. Now the thirteen-year-old must travel over perilous mountains to return money stolen by his mother’s outlaw boyfriend to a deputy U.S. marshal.

On Lonnie’s journey‚ he’s joined by young Casey Stoveville‚ daughter of a sheriff killed by the outlaws. The unlikely pair is attacked by an enraged grizzly‚ encounter a crazy ex-Confederate who may or may not be after the stolen money‚ and must battle the deadly outlaws shadowing their every move‚ intent on killing them and retrieving the loot.

It’s a man’s job. And it’s going to take a man — and the woman the man loves — to see it through.