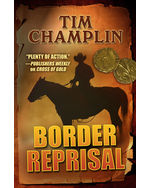 Is there some connection between a string of train robberies, a mysterious nightrider who delivers hand-minted gold coins to poor Mexican peasants, and a violent feud between two former partners? Marc Charvein, Wells Fargo express messenger, and two of his old friends, Carlos Sandoval and Lucy Barkley, cross the border to find out. A ragged Mexican orphan helps them intercept the masked midnight courier. But the trio is captured and taken to the robbers' lair where the outlaws are smelting stolen gold and minting coins. The Irish-born leader has a vendetta against his former partner whose gold is being taken from Wells Fargo. Can the three escape? Will they live to get home?

"Champlin's a veteran storyteller with dozens of novels and short stories under his belt, and this book showcases his finely honed writing skills, especially his knack for creating characters who feel like contemporary men and women and not artifacts. It's a well-plotted, smoothly written western that's sure to appeal to genre fans."