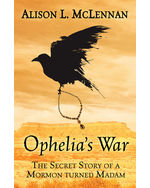 Ophelia's War is a fast-paced historical coming-of-age novel about love, loss, ambition, religion, and the struggle to survive and adapt on the ever changing American frontier.

A harsh desert life becomes even harsher for Ophelia Oatman and her half-breed Indian brother Ezekiel when they become orphans on a remote Mormon pioneer settlement in the Utah Territory. Fifteen-year-old Ophelia fears she will be forced to marry one of the elder polygamist settlers. She hopes the ruby necklace, which she secretly inherited from her mother, and the arrival of her uncle from the east will save her. Instead of a savior, her uncle turns out to be a greedy, whisky swilling gambler who severs her ties with her brother and tries to steal the necklace.