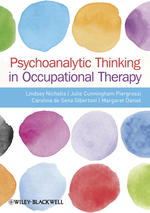 Occupational therapy's early concepts were based on the notion of an unconscious where occupations were a symbolic part of a communication process in therapy (Fidler and Fidler, 1963). From the 1990s, much of this thinking was subsumed as occupational therapists sought scientific legitimacy in the climate of evidence-based practice. Recent theory has welcomed client narratives as valid empirical information and there has been a turn toward object relations thinking, based on the work of Melanie Klein (1988) and Donald Winnicott (1971). This has been echoed in recent methodologies that incorporate psychoanalytic thinking in their use of reflexivity (e.g. Hollway and Jefferson, 2000) and in considering that data generated in much of the research is co-created (Layton, 2008). This book is the first to use psychoanalysis as a basis for exploring how occupational therapists work, and it incorporates a new conceptual model to guide practice. The authors emphasize the role of the unconscious in all that people do and are and argue that occupations are simultaneously real and symbolic. The symbolic value of an occupation includes its social, political, or cultural significance and its potential unconscious meaning. The doing in the occupational therapy relationship is thought about as a form of communication, and the occupational therapist can use a mixture of practical engagement and unconscious resonance to respond to the client and reflect on symbolic content. These mechanisms and processes are fundamental to successful therapy. The first section of the book explores key psychoanalytic theories and their application. The second introduces the MOVI model, developed by two of the authors and presents examples of its application in clinical settings. The third section looks at research methodologies and the implications for training in psychoanalytic OT.