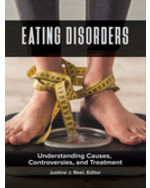 While the stereotype for eating disorders is that of an anorexic or bulimia teenage girl, eating disorders are a form of mental illness that can take many forms and affect individuals of all genders, ages, and ethnic backgrounds. In fact, an estimated eight million people in the U.S. struggle with an eating disorder, making them one of the most prevalent forms of mental illness in America. This two-volume encyclopedia comprehensively examines the forms eating disorders can take; their causes and potential complications; and how they can best be treated and prevented. It also examines the influence of cultural factors such as the fashion industry, television and movies, and social media. More than just a simple A-to-Z reference, this title also includes valuable features such as Q&A interviews with those affected by and working to combat eating disorders, case studies, scholarly essays that voice opinions in key debates, and a directory of resources for individuals seeking help.