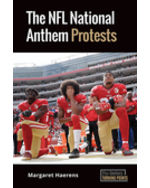 This book is a one-stop resource for understanding the people and events changing America today. It is devoted to the NFL national anthem protests, which have triggered both fierce condemnation and spirited defenses since August 2016, when San Francisco 49ers quarterback Colin Kaepernick first refused to stand for the anthem to bring attention to the issues of social injustice and police brutality. It surveys the events that led to the decision and traces the fallout from that choice-the decision by other players to join him, the angry response from some NFL fans and President Trump himself, and the NFL’s efforts to keep the controversy from consuming it. The book also provides a deeper examinations of all of the issues these events and responses have raised, including the nature of peaceful protest, the place of the flag in American life, the constitutional parameters of free speech, and the facts about police brutality and racial discrimination in America.