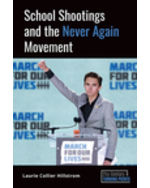 This volume, a one-stop resource for understanding the people and events changing America today, analyzes school shootings and examines the broader issue of gun violence in America. It focuses on the history of school shootings in the United States and the debate that has raged for decades between gun control advocates and supporters of gun ownership rights. School Shootings and the Never Again Movement: 21st Century Turning Points provides a broad perspective on these issues. It recounts the evolution of gun politics and policy throughout the twentieth century, explains the positions and activities of organizations and activists on both sides of the gun debate, details notorious school shootings ranging from Columbine to Parkland, and explores the potential impact of the Never Again Movement on American gun policy at the state and federal levels.