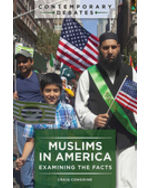 This book provides an objective overview of the realities and experiences of Muslims in the United States, both historically and in the present day, and of their relationship with their fellow Americans. It surveys the history of American Muslims' settlement and integration into the United States; explores the dominant social, political, cultural, and economic characteristics of American Muslim families and communities; and studies the ways in which their experiences and beliefs intersect with various notions of American national identity. In the process, the book critically examines the more dominant social and political narratives and claims surrounding American Muslims and their religion of Islam, including false or malicious claims about their attitudes toward terrorism and other important issues. It thus gives readers a clear and accurate understanding of the actual lives, actions, and beliefs of Muslim people in the United States.