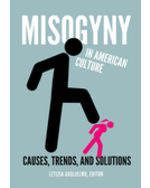 The essays contained in this two-volume set explore misogyny within various areas of American culture to demonstrate its pervasiveness and identify common foundations of its many presentations. Beyond a basic definition of misogyny, which includes hatred of women and girls and the ways in which they influence action, speech, discrimination, policy, and culture in the United States, this project also aims to expand and complicate definitions of misogyny in order to provide readers with a robust introduction and understanding of the larger topic. Given the current political and cultural climate and the more frequent and widespread use of the term misogyny by various media outlets and voters during the 2016 presidential election, this book can both contribute to ongoing conversations on misogyny and, among its intended audience of advanced high school, beginning college students and the general public, to inform a shift currently unfolding in public conversation on the topic.