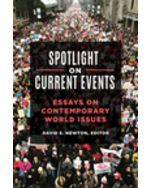 This collection of perspective essays explores a variety of controversial topics, specifically current events and issues such as free speech, school violence, green energy, substance abuse, abortion, gun control, immigration, and more. A general introduction contextualizes the book in contemporary American discourse and shows why the essays that follow are important. Each chapter provides readers with a selection of persuasive and expository essays that they can cite in papers. Each chapter also has individual introductions, explaining how and why the essays were collected together and curated. Readers of this volume will come away with an understanding of the key points of a variety of important perspectives. In a time when the country is so thoroughly polarized, it is vital to give voice to stakeholders on both sides of the proverbial aisle. This book will be a solid resource for libraries, as readers can explore one or more topics in one easy-to-understand volume.

Front Cover.
Half Title Page.
Title Page.
Copyright Page.
Contents.
Introduction.
How to Use This Book.
Politics and Government.
1: Should the United States Enact Tougher Laws to Stem Illegal Immigration?.
2: Resolving the Issue of Illegal Immigration: A Question Of Balance.
3: Homeland Insecurity, Personal Security, and Constitutional Safeguards.
4: Structural Barriers or Impediments to Third-Party Candidates.
5: Party Identification and Core Political Principles.
6: The Roots of Roe: Not Liberty, But Privacy.
7: Going Beyond “Flying While Arab”: Islamophobic Profiling in the Era of Homeland Security.
8: Why Mixing Religion and Political Activity Leads to a Poisoned Chalice: Ending Compelled Taxpayer Support for Religious Political Activity.
Gender and Sexuality.
9: Gender Equality in Sport: (Un)Awareness, Education, and Resolve.
10: Breaking the Gender Binary in Sport: Femaleto-Male Recreational Athlete.
11: Feminisms Coming and Going.
12: Intersex: Beyond the Sex Binary.
13: Living with Gender Dysphoria.
14: Substance Abuse and Transgender Youth.
15: Exploring Victimization in the Digital Age: Perspectives on Social Media and Sexual Assault.
Environment and Science.
16: The Politics of Human Embryonic Stem Cells.
17: The U.S. Government Should Not Require Gm Food Labels.
18: A Growing World Demands New Food Technology.
19: Desalination and Reuse: Facing a Global Water Crisis with Alternative Technologies.
20: Why Fracking Is Beneficial.
21: Fracking and the Future of Fresh Water.
22: Dams, Rivers, and Fish: A Continuing Conundrum.
23: The Moral Dilemma of Animal Research.
Technology and Industry.
24: Why Wind Energy Is Good for the United States and the World.
25: Wind Turbine Syndrome: Health Effects of Noise from Large Wind Turbines.
26: Current Limitations in Solar Energy and Solutions for the Future.
27: Safety, Human Fallibility, and Nuclear Power.
28: A Brave New World For CRISPR/Cas9: Scientific Limitations and Ethical Considerations.
29: The Relationship Between Space and Cyber Assets.
30: Waging E-Jihad.
Law and Crime.
31: Is There More School Violence Today? A Veteran Educator Says No.
32: Criminal Behavioral Profiling: A Critical Perspective.
33: Media Influence on Perceived Offender-Victim Relationship.
34: Mass Injustice: The War on Drugs, Institutional Discrimination, and the Impact on U.S. Prisons.
35: Community Restorative Justice Hub: A Model of Hospitality and Accompaniment.
36: Punish Crime, Not Thought Crime.
37: The Law vs. Violent Bigotry: The Case for Strong Hate-Crime Laws in the United States.
38: Campus Victim Advocacy and Its Role in Supporting Survivors of Interpersonal Violence.
Health and Wellness.
39: Stigma and STIs.
40: Universal Health Coverage: The How and the Why.
41: Why U.S.-Style Health Reform Does Not Work and What to Do about It.
42: Vaccines Are the Key to Preventing Global Disease Pandemics.
43: HPV Vaccine for All.
44: How Fishy Is It? Risk Communication and Perceptions of Genetically Engineered Salmon.
45: Pros and Cons of Dietary Supplements for Weight Management.
Economics and Finance.
46: Student Debt: How Did We Get Here and Why Should We Worry?.
47: Minimum Wages And Living Wages.
48: Policymakers Should Exercise Maximum Caution on the Minimum Wage.
49: Raising the Minimum Wage Would Help, Not Hurt, Our Economy.
50: Consumers as Data Profiles: What Companies See in the Social You.
51: The Impact of the Affordable Care Act on Youth Unemployment.
Drugs and Alcohol.
52: Marijuana Use and Intelligence.
53: Psychiatric Disorders and Substance Abuse: Comorbidity, Correlation, and Causation.
54: E-Cigarette Vapor Versus Cigarette Smoke: Is Vapor Really Safer?.
55: The Myth of the Drug Habit: Defining Addiction as A Disease.
56: Drug Testing High School Athletes and Fitness Trainers.
57: A Perfect Storm for Prescription Drug Misuse.
58: Rationale for Cannabis-Based Interventions in the Opioid Overdose Crisis.
59: Marijuana Is Not Safe and Is not Medicine.
Life and Death.
60: Who Should or Should Not be Born? The Collision Between Reproductive Rights and Disability Rights.
61: Religious Choice in Medicine: When Cancer Patients Have Religious Objections to Life-Saving Blood Transfusions.
62: Is There a Right to Die?.
63: Why Disability Rights Advocates Oppose Assisted Suicide.
64: The Death Penalty Should Be Abolished—For Very Practical Reasons.
65: Capital Punishment Should not be Abolished in the United States.
66: Gender and Capital Punishment.
67: What Should We Do with Juvenile Murderers?.
Index.
About the Editor.