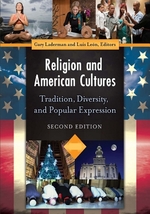 This revised and expanded edition of Religion and American Cultures: Tradition, Diversity, and Popular Expression presents more than 140 essays that address contemporary spiritual practice and culture with a historical perspective. The entries cover virtually every religion in modern-day America as well as the role of religion in various aspects of U.S. culture. Readers will discover that Americans aren't largely Protestant, Catholic, or Jewish anymore, and that the number of popular religious identities is far greater than many would imagine. And although most Americans believe in a higher power, the fastest growing identity in the United States is the "nones"-those Americans who elect "none" when asked about their religious identity-thereby demonstrating how many individuals see their spirituality as something not easily defined or categorized. The first volume explores America's multicultural communities and their religious practices, covering the range of different religions among Anglo-Americans and Euro-Americans as well as spirituality among Latino, African American, Native American, and Asian American communities. The second volume focuses on cultural aspects of religions, addressing topics such as film, Generation X, public sacred spaces, sexuality, and new religious expressions. The new third volume expands the range of topics covered with in-depth essays on additional topics such as interfaith families, religion in prisons, belief in the paranormal, and religion after September 11, 2001. The fourth volume is devoted to complementary primary source documents.