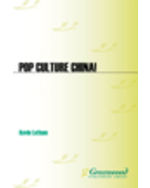 To westerners, Maoist China was a picture of gray homogeneity. As China emerges from drab Maoism, its popular culture presents a bright tapestry of media, entertainment, communications, sports, food, and consumerism. This book displays for the general reader the colorful cloth that is modern Chinese pop culture.

China's release from Maoist austerity has produced an explosion in popular culture. The Chinese have embraced such technologies as television and cell phones and shaped them to their own social context. Understanding modern China requires a thorough knowledge of daily life there.

The author, a scholar of Chinese culture, draws on his own fieldwork, along with authoritative scholarship and reporting, to give the reader a comprehensive, lively, and accessible introduction to all aspects of Chinese popular culture. From the modernization of traditional theater to the traditional uses of modern technology, this book presents a guide to the emerging culture of a country that will inevitably become increasingly influential in coming years.