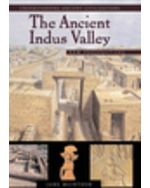 This work is a revealing study of the enigmatic Indus civilization and how a rich repertoire of archaeological tools is being used to probe its puzzles. The Indus Valley gave rise to one of the most sophisticated civilizations of the Bronze Age, a remarkably peaceful society that developed everything from a complex political organization to sanitary plumbing to a rich mythology. Then it vanished, forgotten by history for millenia, until remarkable finds in the 1920s led to its rediscovery.

The Ancient Indus Valley: New Perspectives takes readers back to a civilization as complex as its contemporaries in Mesopotamia and Egypt, one that covered a far larger region, yet lasted a much briefer time (less than a millennium) and left few visible traces. Researchers have tentatively reconstructed a model of Indus life based on limited material remains and despite its virtually indecipherable written record. This volume describes what is known about the roots of Indus civilization in farming culture, as well as its far-flung trading network, sophisticated crafts and architecture, and surprisingly war-free way of life. Readers will get a glimpse of both a remarkable piece of the past and the extraordinary methods that have brought it back to life.

Features and highlights include: